So this year we took a big step and started a new chapter in our lives.  We bought a yacht.  Kata Brave as she is currently named was built by the Baron Shipyard in Hamburg Germany in 1986 out of steel.

She is 60ft in length, 14.5ft in beam with a 8ft draft bringing her weight to approximately 25metric tons.  She is rigged as a Cutter. 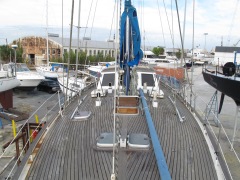 As you will see from the following photos she is a project. She has suffered to some degree from electrolysis from negligence at a marina.  Luckily the damage was caught in time with minimal metal work/welding needed. The bottom has been sand blasted back to bare metal.  Kata Brave has been ultra sounded to determine the thickness of the plates and to check if there were any weak areas. The test came back very positive.

Once all of the welding is done, she will need to be primed and painted accordingly to protect her against corrosion.

The rudder will need to be rebuilt. We will need to install a new engine or rebuild the current 120HP DAF engine that has been taken out of the boat.  She will also need new cutlass bearings and propellor shaft.

The deck is fully teaked.  The good news is that the teak is glued down rather than being screwed down.  This reduces the chance of the deck leaking.  The bad news is that the bonding of the teak to the deck has given away in areas and in turn this has allowed water to penetrate between the teak and the steel deck.

The teak could be rotten underneath and we also could have surprises with the steel deck from too much water trapped for too long. So the teak has to come off to inspect the steel deck and determine if the teak is salvageable. Rigging wise she is sound.  I plan to eventually de-step the mast and change all the standing rigging.

The interior is spacious with an 80’s feel.  The detailed carpentry is outstanding. She consists of a Master cabin in the bow.  The saloon is U shaped with a drop down table to convert it into a bed if need be.  Opposite the U shaped saloon there is a long seat which also can be converted into two bunk beds. Moving back we have the galley and the midship cabin with 2 single bunk beds. In the pilot house we have a chart table, inside helm and a small sitting area with table.

Then aft we have the aft double cabin.  Kata Brava has two heads and showers; one is fwd and the other is aft.The areas that will need modification is the aft cabin, and both heads/showers.

The aft cabin has a row of cupboards on the hull side with the bed going under the cockpit sole.  We would like to switch these to allow more head room in the bed.  Also the sole of the cabin is high so we will lower it.  There is a lot of  electrical breakers in this cabin, we will relocate these and with the sole dropped we will gain more room in this cabin.

Both heads/showers have lots of cupboards and a huge sink in each.  We will gut both heads and make them more practical.

The Electronics, the air conditioning and heating system’s will also need upgrading.

Basically a lot of work which we believe is achievable and in which we are not afraid of.  Kata Brava is a real project with a lot of potential.