I’ll be the first to admit that I have officially suck at keeping up to date with Blog posts. Months ago I thought I would have so much time on my hands and that this would be an easy task.  But since June, since we have been living on Nomadica I have been struggling with writing and more enjoy living this life we have been dreaming about for so many years.  I guess a part of me also don’t want to fall in to the trap of writing about something rather than experiencing it first hand. I’ve seen it where arrivals and departures and significant moments have been missed simply because one has been too engrossed in writing about it.  Sometimes its nice to look up and appreciate life around you instead.

Enjoying a Caribbean Sunset on the beach with friends for Christmas Eve.

So a year ago today we arrived back in Charleston full of excitement and motivation.  It hasn’t been the easiest of years but we have enjoyed doing everything for ourselves as appose to living the life as professional crew.

This Christmas was the first time we have spent in our own place, our own home in 13 years, the last time being aboard our little Noa in Brazil where we spent our first official Christmas together anchored of Itaparica.  Crazy how time has passed.

This year we spent Christmas eve and Christmas on a beach here in Martinique with new and old friends.  The oldest friends being a couple we met 13 years ago when we first started sailing together.  We met them in Ascension Island and at the time were the only two boats anchored there.  Adrian and Hiltrut had been sailing for many years together and had at the time a 5 year old son Eric.  We spent some fun times together then and departed Ascension the same day they bound for the Caribbean and we for Brazil.  That following year we met up a few times in various locations in the Caribbean and then years passed again before we met them in St Lucia when we were officially working on one of the Gunboats.  It was nice to see them here again in Martinique and its like time has never passed. Although their son Eric is now an eighteen year old which reminds us of how time has really passed. 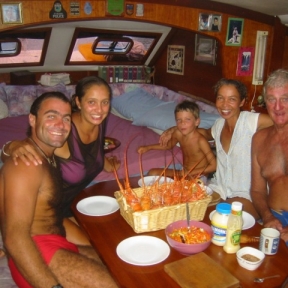 Early 2005 in the Caribbean with the crew from Catar. 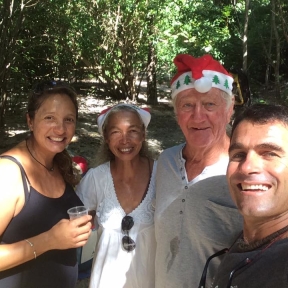 One of the things I enjoy immensely about this life is the people you meet.  Unlike land life where you might never meet your neighbor.  On a boat that is almost impossible and if anything once on anchor its quite common to go and say hello to those around you.  We’ve met some wonderful people in the last few months and have started to build great friendships.  This Christmas we spent with those on a beach having a cruisers pot luck. It was a great day filled with good company and excellent food to share in a beautiful location.

The tender line up on the beach. 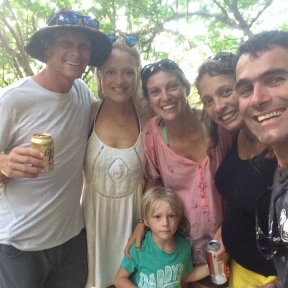 For those that don’t follow us on Facebook, its time for me to also admit one of the reasons why I have been slacking.  Life for us is about to change.  In less than 10 weeks we our adding to our crew list.  Yep Baby Morice will be arriving in early March :-).  We couldn’t be happier and this new addition has been a long time coming.  Being in the early stages of pregnancy in our last month in Charleston was not easy.  Loading the boat, finalising work, changing rigging and the mountain of other things we had to do whilst suffering with nausea and fatigue was not much fun.  On the 2000 mile sail to the Caribbean I was far from my usual self and totally out of balance.  So for now we have decided to put down our roots for the next few months and continue the pregnancy here in Martinique where the medical facilities are the best in the Caribbean.

It hasn’t been a smooth journey but we are grateful.  A new chapter in our lives will soon begin.

Seasons Greetings from the Caribbean.

12 thoughts on “Christmas in Martinique.”