Its crazy to think that it has been over six weeks already since we arrived in the Caribbean.  Time has just flown by.  I’ve been slacking, so before I get lost with tropical scenery, sunshine, sandy beaches and amazing sunsets, I figured it was time to look back on the last few weeks that we were in Charleston.  I know it feels like such a long time ago already.

However quite a few important jobs got done those last few weeks, and for our own sake it would be a shame to not document this.  So here goes in no particular order.

Originally we had hoped our departure from the USA would have been a relaxed one and we would have been able to hop down the coast to Florida and get to see my Aunt and Uncle in Florida again.  However things didn’t pan out that way so my Uncle came up for 6 days to see us and to also help us out.

It was perfect timing.  Back in February we had ordered our wood for the interior work thinking we would be working on that first.  However priorities changed with the Immigration restrictions and interior work was pushed aside.  So there was still a good 10 sheets of wood that was sitting in our container waiting to be used.  The thought of carrying that load was making us cringe.

My Uncle is also a carpenter by trade so of cause this was his area of expertise.  So the idea was to get as many wood panels up in the aft starboard cabin as we could.  Now this sounds pretty straight forward and if you were doing four straight square walls it would be pretty easy.  But we all know that things on a boat is far from straight forward and not many walls are straight.  So for 4 days they worked tirelessly on that one cabin.  Taking measurements, going out to the dock to cut panels, bringing them back in for dry fitting numerous times, and then finally securing the panel’s in place.

Checking out the wood. 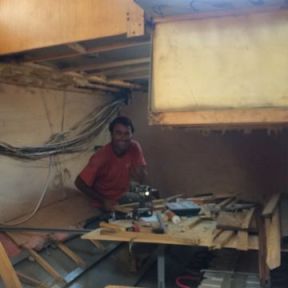 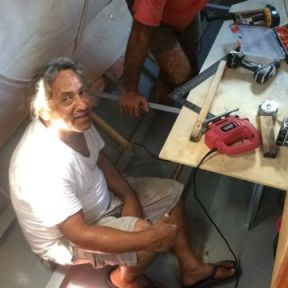 Exhausting work in the heat.

It was great to have a extra pair of hands.

Oops we lost the companion way. 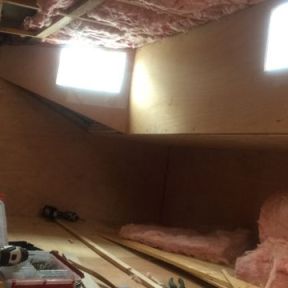 During this process we loss one of the sides to the main companion way doorway to.  All rather stressful when we were weeks away from departing. Even my Uncle commented that everything was taking a lot longer than he would have anticipated.  Ha that’s life on a boat for you.

We didn’t get all the area’s completed that we wanted to, but at least a fair majority was done.  That lessoned the amount of sheets we ended up carrying.

We had absolutely no clue how old the rigging was on Nomadica.  At best it could have been 12 years old, which is as long as she had been roughly sitting in the yard and at worse it could have been as old as the boat itself, which is 31 years old.  So we decided to get all of this changed.  Originally our plan was to take the rig down, remove all the parts for servicing, repaint the mast white and then reinstall with new standing rigging.  We had estimated that this job could take us an easy 6-8 weeks plus.  Time we didn’t have so we went with just changing the Standing rigging and will hopefully get to the rest when time allows.

Lots of trips up the rig. 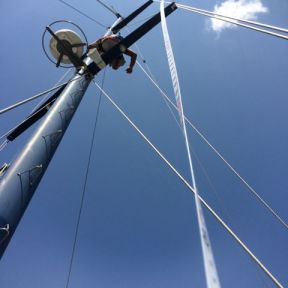 Unfortunately we couldn’t measure the standing rigging or go up the mast when the boat was on the hard so we had to wait until we were in the water before we could get the current rigging measured.  We did this on the 4th July when there was no one around and a slightly quieter day.  Morgan went up the rig in his harness and I stayed below with the end of the tape measure. It wasn’t easy with the slight breeze and it took us a few hours to get all 13 cables of rigging measured and documented. 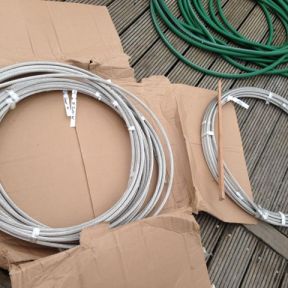 Having to go up the rig lots of times.

Good to have the help. 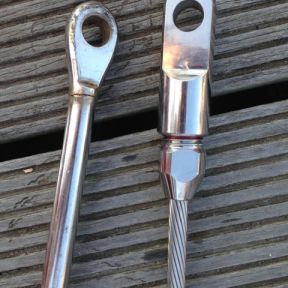 A week later our rigging slowly arrived. It was perfect timing as my Uncle was still with us.  One by one we took the existing standing rigging down, cut the new rigging to size, we fitted the mechanical end fittings to the cables and then hoisted the new standing rigging into place. Again it sounds straight forward but it took the three of us about 3 days to get it all completed.  I was grateful to have my Uncle there to help as it was quite hard work hoisting the cables which at the longest was 69ft. 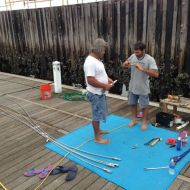 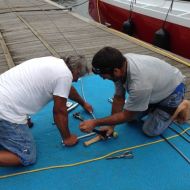 Putting the terminals on.

Taking the forestay of.

At least we now know the Standing rigging is good for a while.

Working until late at night.

We got two out of the four manual bilge pumps installed along with 3 out of four electric pumps.  We figured with a boat that hadn’t sailed for nearly 12 years this was a must.  There was already mounting holes for the two manual bilge pumps in the cockpit.  One situated on the port side of the aft cockpit combing behind the steering wheel and another by the lazarette locker.  The aft is to pump out the aft steering locker and the lazarette one has hoses ran to the engine room.  So along with the pumps being installed all the plumbing for these had to be run to. 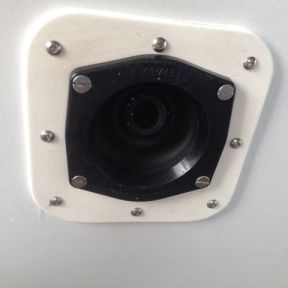 For the electric bilge pumps we installed one in the forward peak under the master bed.  The anchor chain locker that is in the peak runs aft to a small section under the master bed.  Not quite practically but easily accessible, so there’s a pump there.  The second pump was installed in the engine room at the lowest point and the third pump was installed in the steering locker.  Again plumbing had to be run for these. 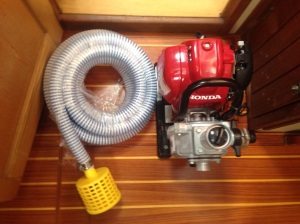 We also invested in a Honda water pump which can act as a fire aid to get water into the boat quickly or to speed up the process of emptying a water filtrated area.  We had one of these pumps on Louise.  It wasn’t until our last passage up the Atlantic that we utilize it, but that one time having to use it justified having one on board.

Although structurally sound we know all to well that things happen fast and if they get out of control water enters a boat super fast to.

I’m kinda hoping that if we have it, we won’t need it.  We were fortunate that in our first and last passage from Charleston everything stayed dry.  But you can never be too safe right.

Our electronics package that was received weeks earlier was installed prior to our departure.  This took Morgan a few days to do.  He wants to eventually make a new dash board for the instruments, but again pushed for time we made do with what we had. 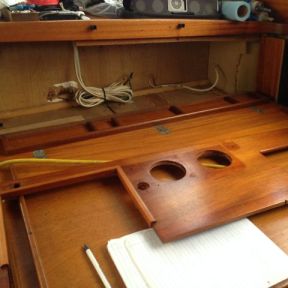 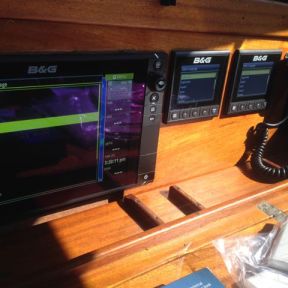 The entire installation he carried out himself, running all the electrical wires require.  This installation included a new B&G Radar and Chart Plotter Display, new B&G wind and depth instruments, Garmin AIS, Icom VHF, Iridium antenna and radar. He fired all the system’s up before departing and everything worked great.

Along with the instruments installed we also got the navigational lights on the pilot house replaced and a stern light installed on one of the aft poles, along with a new Tri-colour light installed at the top of the mast.

Whilst working up the rig installing the new Tri-colour light we also ran a new cable for the new wind indicator.  It wasn’t much fun trying to squeeze a wire in an already filled conduit. 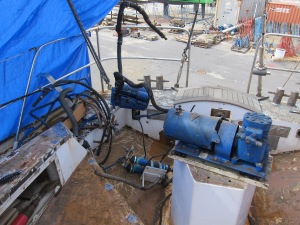 Early 2013 when the system was removed.

The Compressor, RFD and Condenser for the Refrigeration and Freezer system was taken out of the boat in 2013.  Not thinking we would keep this system Morgan cut all the copper pipes and removed the entire system from the Engine Room compartment.

Once we learnt that this was a fairly new system and that Glacier Bay was in fact a good system we decided to give the unit a try, not really knowing if it would work or not.  You will remember a few months earlier I took everything apart, cleaned all the components, and painted the majority.  Not really knowing how it would all be put back together again I just left everything in a container for Morgan to deal with.  It baffled me how he was thinking of putting it all back together again with the hope of it working.

Parts of the refrigeration system. 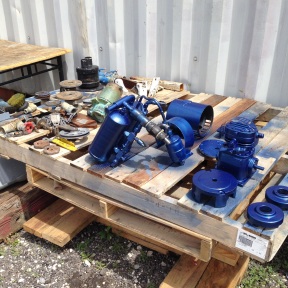 Refrigeration parts getting a fresh coat of paint.

Again just before leaving he got this unit put back together.  It was a tight squeeze getting the very heavy unit back in to its location.  He then soldered the copper pipes back together again. 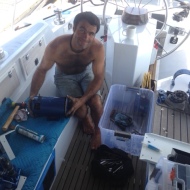 Putting all the parts together.

A tight squeeze getting it in.

He had wanted to hire a Refrigeration specialist to come in and check and charge the system but unfortunately it would seem that no one was interested in coming out in the South Carolina heat to deal with refrigeration when their priority at that time of the year was air conditioning.  So he went and bought the gas and equipment and did it himself.  Low and behold when he fired the system up it all worked.  Amazing. 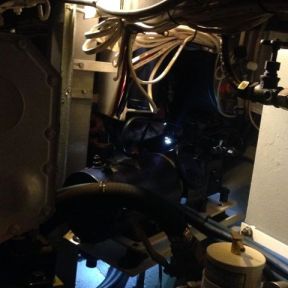 The unit back in place. 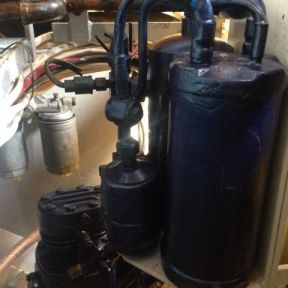 The unit back in place.

There’s been a few continuous adjustments but we are happy with how everything works.  The freezer in particular holds the cold well and anything close to the plates freezes pretty quickly.  So ice is always readily available.

Our sails we put on just before our departure.  It took the two of us a day and a half to get everything on right and we were absolutely amazed and delighted when all three of our sails fitted perfectly.

Main sail up and perfect.

Our sail package was ordered months before through Zoom Sails in Malaysia.  Morgan had made the order via email with Zoom Sails Owner Phil Auger.  Our sails were received 4 weeks after the order was placed and we can both say we are absolutely thrilled with them.

We went out for a two hour sail trial in the harbor the last Friday in Charleston and was pleased with everything and how Nomadica performed.

Thats about it, the last four crazy weeks in Charleston.  We were running around like headless chickens for most of that time and our days were long and tiring.  Gladly its all well behind us now and our new work location is like a world away.

3 thoughts on “The last few weeks in Charleston.”