I guess I talked to quickly last week, as this week the temperature dropped by at least 10 degrees and it was chilly.  For most parts of the morning we would be in the single digits and just slightly warmer by mid afternoon.  However thats not a problem as we have tons to do inside and the weather is just the excuse we needed to get started in there.

I’ve called this week demolition week as thats how it has felt.  It’s not an easy thing to do, pull the boat apart and see it in a mess again, but its necessary to progress.  We know that.  We’ve thought long and hard these last few weeks about what we want to do, and we realise there is no other way to get the boat looking the way we envisage.  So in some respects its been a bit of a hard week.

We started of the week with Morgan double or perhaps triple checking the measurements for the shaft and running around trying to find Machine shops that could fabricate a shaft for us.  Although parts of North Charleston is fairly industrial and we are near a commercial port where there is a few machine shops it wasn’t an easy find.  Some machine shops were either of the roof expensive or just didn’t cater for our size.  There’s a lot of ship shafts being made but not quite a shaft for a 60ft yacht.  By the end of the week we had found a reasonable Machine Shop in North Carolina.   So at some point this coming week we will get the prop shipped to them for accuracy. 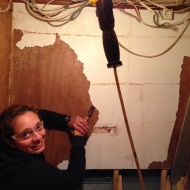 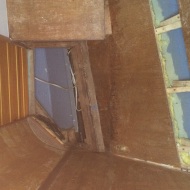 Whilst Morgan spent most of the day doing that I continued clearing out the fwd head.  Its amazing how difficult it is to get glued, screwed and nailed formica of a wood base.  It took me a day and half to just clean up the fwd head walls to satisfactory before starting on the Aft Head walls.

We also took a visit to the nearby Timber Mill Company just to have a look around and to see what our options were. We went through the boat and made a final decision on what we would need and would like in terms of wood and veneer etc.  Its an important decision as we will have to live with this look.  We looked at what we also could salvaged from before and although initially we were thinking that we would have to change the galley ceiling, this is now one area that we have reviewed again and feel we could possible leave the way it was and salvage the original ceiling panels. Morgan also looked at other wood suppliers elsewhere in the country, so fingers cross early this coming week we will be able to make an order. 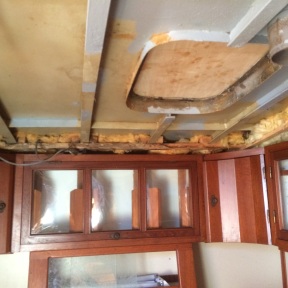 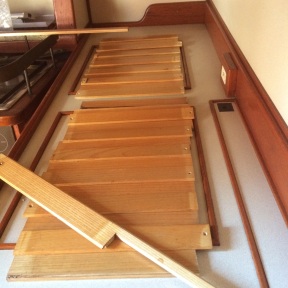 Wood panels that we kept.

Jimmy our Welder that we used previously also came to the boat.  We went through our welding jobs with him and made up a list of work required with accompanying drawings.  Hopefully when we are ready he will be able to start.  We’ll have more on that later.

In order to try and progress in another area of the interior, we decided by mid week that it was time to tackle the aft starboard cabin.  This cabin we lightly gutted, however it housed the two Electrical panels, one Engine Control panel and the Battery Isolation switches and the old battery bank.  Firstly we got all the batteries in this area of the boat.  All 13 of them, not a light job even though they are small. 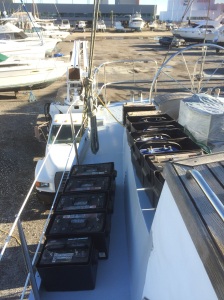 All of the panels and switches we want to locate a foot or two forward so that it is in the Pilot House area and not the cabin.  So we started on the Electrical next.  There is so much wiring through the boat.  Obviously KB being built in Europe had DC 24V and AC 220V systems, however once she arrived in the USA, the 110 AC system was added to the boat. Non of the wiring was removed so there is a maze of wiring, and almost an over kill of wiring. 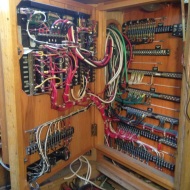 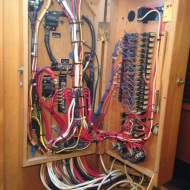 This was a two man job, and we worked panel by panel.  Whilst Morgan disconnected the wiring I labelled and we pulled it through to the necessary area we wanted to have it in.  This still needs a lot of organising and work but at least we have an idea of what we are getting into and have started the process.

This took us nearly two days to do and then once we got all this somewhat out of the cabin, we continued to take out the rest of the wood panels and rest of the interior, minus the insolation.  We are going to use some of the wood from this cabin in the forward head as the heads will be a painted.  Unfortunately a lot of the wood panels in this cabin was once again, glued, screwed and nailed, so it wasn’t an easy job.  However we will salvage what we can and use the stainless steel screws and electrical fittings.

A maze of wiring.

Unfortunately the aft Starboard cabin like the Pilot House had suffered in several areas from water damage.  Just one or two loose screws, or a deck fitting loose and in the worse case a rusted spot had resulted in infiltration of water into the boat and damage to the wood.  In the cabin in particular we had to also do some welding on the outside the last time we were here, so the interior needed to be gutted to have access to these areas.   We have decided to give this cabin a completely different look so we needed to strip it back before we can start over. 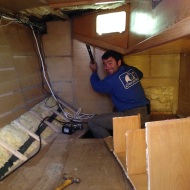 Started the clean out. 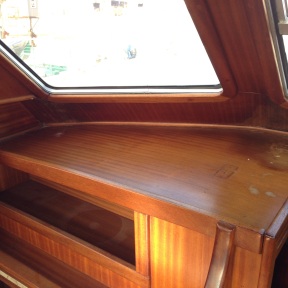 On Saturday Morgan removed all the battery cables from the battery bank area in the starboard cabin and finished cleaning up this area.  We will be installing all new batteries but will be re-using these cables when the time comes.

Now this cabin is ready we can start taking care of the work that needs to be done in there.

Thats it, another busy week gone and new one about to begin.