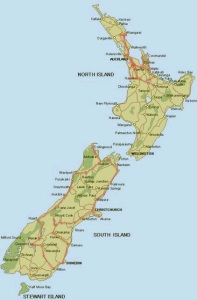 Our route around New Zealand.

Although I feel we have moved on from New Zealand physically and by blog, I do feel that it does deserve its own mention.  It is a special place and holds a piece of our hearts.  If we ever lived on land somewhere….this could be it.

However what can i say that I haven’t said already.  Its an amazing country.  It has almost every landscape imaginable and the people are super friendly.

New Zealand’s culture is mainly derived from Maori and early British settlers with recent broadening arising from increased immigration.  Historically the country’s economy was dominated by the export of wool, but today the exports of dairy products, meat, wine, along with tourism play’s a significant role. 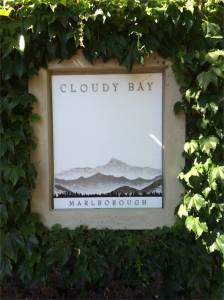 One of the most known wines.

New Zealand produces some of the best wines in the world and we were fortunate to have the pleasure of visiting some of the fine vineyards.  With the fine wine comes the food which is absolutely exquisite.  From the delicious gourmet restaurants to the most lively food halls. I had some of the best meals in New Zealand.

New Zealand comprises of two main Islands, the North Island and South Island with a few smaller Islands scattered around. Its believe that because of its remoteness it was one of the last lands to be settled by humans. Its long isolation meant it developed a distinctive biodiversity of plant life, fungi and animals.  Its interesting to note that unlike its neighboring Island Australia, New Zealand doesn’t have any venomous or really dangerous animals or insects.  This makes it a brilliant location for interior exploration. 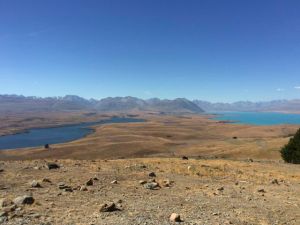 Lakes in the South island.

Four years ago when we spent a weekend in Auckland we enjoyed it, but I think it was to brief of a visit to really like it.  This time I can say I almost fell in love with the city of Auckland and the rest of New Zealand.

Auckland is vibrant, lively, almost too busy at times, being the most populous city of New Zealand.  However the CBD is small enough to dash through.  Several times I would wonder through the streets and enjoy the hustle and bustle, the sights and sounds and the smells.  When it got too much its easy to just walk away.  A street or two and it becomes quiet again. I’ve wondered through Albert Park that sits just of the side of Queen street, the main drag in Auckland.  A beautiful location that takes you miles away whilst looking up at the towering city.  Like any city it has its dodgy parts and characters, but thats what makes it real.  I remember the first time seeing a homeless person I felt kinda shock that there was actually homeless people there.  Was I really that naive.  Its a city.

Auckland sits on the water with commercial shipping and pleasure sailing in abundance.  Its known as the city of sails, and there isn’t a day when there isn’t a boat out on the water.  New Zealand has one of the best yachting facilities on this side of the world and its for this reason that the summer sees an influx of yachts big and small.

Our first weekend in New Zealand we hired a car and just drove.  We ended up on the Coromandel Peninsular.  We must have said wow a hundred times on route.  The rolling fields and rugged coast line was breath taking. I think you have to live life on a boat surrounded by sea and sky to really appreciated the greenery that comes with life on land.    The views was spectacular.  At that time it was still early in the season so the air was cool and crisp.  I hate to admit it but we did enjoy the cooler climates after months in the sun and heat.  Although the continuous rain at times got a little tiring.

The view from the Coromandel Peninsular.

However when summer came it was absolutely glorious weather.  We were fortunate to have a stretch of hot sunny days on our South Island trip.  Long summer days where we would go from dry canterbury plains to snow capped mountains within a few hours.  The color’s were magnificent browns and blues.  The amazing varied topography and mountain peaks is owed to the tectonic uplift of land and volcanic eruptions.  The disadvantage of this is the countries susceptibility to earthquakes.

The views on route to Akaroa.

The icy blue rivers and lakes were breath taking and the beautiful beaches were often picture perfect.  Our only complaint for the west coast of the South Island would be the sand flies and mosquitoes.  We had been warned, but really was not prepared for how bad they were.  Although they can’t kill you they did a brilliant job at spoiling some of the most beautiful camping spots.  Like a miniature housefly thats been kept on a hunger strike and fed steroids, these little critters really could bite.

However you could travel for miles and although you past many people it never once felt like there was lots of people around.  It felt so big yet in reality it is a small country.

The South Island has eighteen mountain peaks reaching over 3000 meters into the sky.   The highest of which is Mount Cook that stands at 3754 meters.  Although we didn’t actually go to the Fjord lands we believe this part of the South Island is absolutely spectacular. 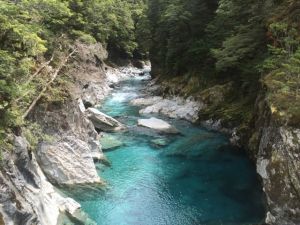 The North Island is less mountainous however has volcanoes and plateau’s.  It is with regret that we didn’t see as much as we had hoped to in the North Island.  However the rugged coastline, beautiful beaches and lush interior we did get to see gave us a little insight into its beauty.  I never associated New Zealand with a beautiful beach scene.  I was wrong, as the beach’s are stunning.  Even I can admit to having a swim.  The North Island is blessed with many close of shore Islands.  Although we saw very little of the sailing grounds, we could tell that it has a beauty that can draw you in.  I would say you could spend months if not years sailing around and still not see every bay and cove there is.

The Bay of Islands.

Perhaps thats what we’ll do the next time we are on this side of the world….we will get lost in the land of the long white cloud.