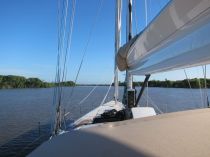 We snaked our way out of the shallow depths of the Rio Plata on Friday 6th December.  I still cringe about leaving port on a major trip on a Friday, but have long realized that with the tight schedule and if the weather is right anything I say in accordance will fall on deaf ears. It was hot and sunny with a chill to the air.  With six of us on board watches were doubled up.

As we progressed down the Rio Plata the boat and ourselves if allowed became covered in cobwebs and tiny spiders that seemed to fly through the air.  The tiny spiders proceeded to full the rigging with streams of white webs. 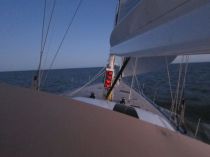 We had covered the 120 miles out of the Plata by dusk.  Our first night at sea was pleasant with a spectacular night sky and growing moon. 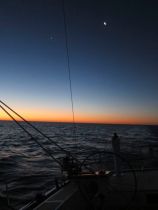 By the next morning the chocolate water had disappeared and we were back in the clear ocean.  The second day we started to pass seals and penguins just like we would normally pass birds and dolphins.

That afternoon we watched in anticipation as a cloud formation formed on the horizon.  We were still fairly close to shore so continued to get the local weather conditions.  As the wind picked up and the sky darkened we acknowledged the fact that we had to be on the edge of a pampero.  We got hit fast and furious with a squall.  The skies opened up and delivered our first hale storm as everyone scurried around on deck.  Then just like that it was gone.

Three and a half days after our departure we sailed towards Peninsular Valdes.  As we approached the cliffs it was hard not to compare them to the cliffs of Dover in the UK which we had past just over three months before.

We proceeded in the dark towards the anchorage of Puerto Madryn where we would spend the next two days.

Thursday 12th December we left Puerto Madryn and continued South.  By this stage we had officially checked out of Argentina.  The forecast was not as we had hoped for and by early hours in the morning we were hit with strong headwinds.  Our destination for the following night was a small cove on the coast called Caleta Horno.   After spending hours tacking to our destination we finally reached the barren coast.  From the sea looking in it was hard to imagine that within the cove was a enclosed and secure anchorage.

We weren’t alone and saw another cruising yacht.  An older couple on a Aluminum boat bound for Ushuaia and Antarctica.  We dropped anchor close to the cliffs and tired our stern to the opposite side of the bay and spent a quiet tranquil night amidst the cliffs.

Being Friday 13th no one wanted to tempt fate so a quiet overnight anchorage on the Patagonian coast was much appreciated.

With the weather forecast looking somewhat in our favor we started on our journey on the Saturday afternoon.

As the first night approached the wind started to increase.  Fortunately it was a south westerly breeze so the sea took a while to build and never really matched the wind strength which topped to just over 40 knots at 4am.  The temperature had dropped and we were all kitted out to the maximum with our warmest gear and foul weather suits.  Masses of kelp were everywhere and bird spotting became a topic of discussion on board.

The days are considerably longer here in the South.  Dusk is around 10pm and dawn around 4am.  So a very brief period of darkness experienced, which when at sea is great.

The days that followed were unbelievable we had a steady breeze and a good sea.  The miles seemed to slip away under the keel

During our 1am-4am rotational watch we strained our eyes to see a head.  The night was dark and we were closing in on land.  At ten miles away nothing could be seen but darkness in front of us.  It was hard to imagine land was right there.

Then at 3:30 am just like that a light shined through a cloud on the horizon and the Falkland Islands could plainly be seen.  As our eyes grew more and more accustom we saw more of this much awaited land.  An excitement grew as we felt the trip was coming to an end.

As dawn came in the rocky outcrop became a welcoming sight.

It was a cold grey morning but nothing could dampen our spirits.  At 8am on Tuesday 17th December we were docked on the Fipass dock in Stanley Harbor.

What a wonderful sight and amazing feeling of accomplishment.