This was a totally new destination for me.  I had never given the country much thought before.  I will be honest to say that when ‘Argentina’ was ever mentioned I thought of Steak and Delicious wine…I guess thats saying something about me.  So of cause on our arrival this was priority, to have a good Argentina steak and to try the wine.  I have to say I wasn’t disappointed and they both exceeded my expectations. 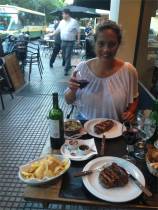 We were docked in San Fernando which is about 40km out of the city of Buenos Aires.  San Fernando is the yachting hub for the Argentina’s rich.  However judging by the shallow depths to get there and the great number of power boats present sailing doesn’t seem like a big pass time for the Argentinians.

Buenos Aires – Our first weekend we spent exploring and playing tourist in the city.  Morgan had been here thirteen years before and had told me about this amazing city.  It was fun to be in a big city again. 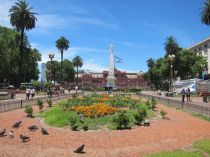 However life in Argentina has obviously changed over the years.  You could tell that once a great city it now seemed to be struggling.  Tired and ran down area’s were everywhere.  Morgan had raved previously about how this was a different city to Rio or any other city I had been to it.  He remembered it as having a very rich European feel to it.  Now he couldn’t believe how much it had changed over the years.

You could imagine that in its hay day life was grand.  Now the side walks have piles of rubble everywhere and the once beautiful buildings are in need of maintenance or at least a wash.  The general feel we got from the locals was that the country was in trouble.  This was easy to believe from the little we saw.

However the touristy highlights that we managed to fit in in that weekend provided us with a great weekend getaway before the rest of our stay was once again consumed with warranty work.

Puerto Madryn – Our two day stay in Puerto Madryn was busy.  The city was a lot more built up than what we all expected and from what Morgan had remembered.

Entering the Golfo Nuevo at dusk our eyes were peeled for whales.  This area is notorious for whale sightings and although we were a little late in the season we still had high hopes.  One evening whilst on anchor three whales played around in front of the boat.  Quite a spectacular sight for sure.  Its hard to imagine that at the peak, this gulf would be filled with breeding and mating whales.  We got to see a small colony of seals and on a daily basis there would be a group enjoying the sun on one of the pier steps.

Caleto Horno – A tranquil over night stop on the Patagonian coast line surrounded by cliffs and wildlife.