This leg wasn’t the most glorious of passages.  On leaving Rio de Janeiro we had to motor the 70Nm south west to Angra dos Reis.  It was a beautiful sunny Sunday without a breath of wind but an onshore swell which made our journey slightly uncomfortable at times.

The area of Ilha Grande to Ilha Bella is also known to be without wind.  This was most definitely true for our week of cruising.  On leaving Ilha Bella on the 11th November the winds were also not in our favor.  However with a schedule to keep and weather to avoid we pushed on.

The first two days saw the wind shifting from every direction and with extreme strengths.  Our second night at sea we had the most breath taking night sky with a growing moon and an abundance of stars.  However the wind and sea was as fierce as we had seen it so far.  With over 30knots of wind directly on the noes the night was long, tiring, testing and uncomfortable.  Progress south was slower than we had hoped and the forecast thus far wasn’t quite what sailors smile about.  Looking ahead at the weather we could see that it wasn’t going to get any better within the days to come.  A pampero was predicted and we were far from any shelter.  Again our choice was limited to pushing on.  Our only hope for shelter was far up the Rio Grande in Brazils most southern and industrial port of Rio Grande dul Sol.  By 18:00 on the 14th November we were miraculously at the entrance to the river mouth.

We were greeted by seals playing around the boat and basting in the sun on the breakwater wall.  A fun sight but a sure sign of cooler waters.

Fourteen miles later and just before dusk we were tired up on a rickety fishing dock, which was as far as the river depths allowed us to go.  Adjacent to the Yacht Club we at least could use their facilities.

We stayed two nights in no mans land with just the comfort of a relatively fast internet connection whilst the notorious Pampero blew through.

The temperatures dropped significantly over those two days and the duvets came back out.

We all felt the chill as we continued our journey south.  Again the wind was non existent and the sea slowly flattened out after the past few days weather.

Several times throughout the day we spotted seals playing in the shallow coastal water.  Land could often be seen to our starboard.  Sunday 16th November we crossed the imaginary border line from Brazil into Uruguay. 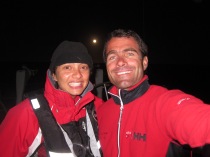 Novembers full moon provided another spectacular night.  The wind slowly picked up from the North.  Shortly after the sails finally came out and we clocked in the miles.

Monday morning we sailed into the Rio del Plata.  The water turned from a dark green to a chocolate brown as we progressed further.  It was two days later on the 20th November before we passed the skyline of Buenos Aires as we made our way to San Fernando which is north of the city itself.

For that moment we were happy to be in a new Country.