At 1pm on Thursday 3rd October our anchor was up and we continued on our passage south.  For the majority of the afternoon Fernando de Noronha could be seen behind us.  The winds were steady and we trotted along.  With the time difference sunset was around 18:00, so night seemed to draw in pretty quickly.  That first night we had a good squall giving us a blow of 30 knots of wind and a good practice on our reefing skills.

Night two our course took us a little closer to shore and as we reached in the dark of the night the glow from the coast could be seen to our starboard.  Early hours in the morning Mother nature once again tested us.  These big black clouds seemed to come out of no where and throw a punch at us.

The days were hot and sunny with a cooler breeze.  Time seemed to fly by just like it seemed to stand still.  Each day seemed long but at the end of it, if felt like it had disappeared to quickly and another night was upon us.   Time is a strange thing.

Night 4 we were sailing two hundred miles of the coast heading almost straight south.  We past Salvador earlier in the day and such a point marked our half way mark.  Even though we were miles of shore we seem to have a lot of company in the form of cargo ships going north and south.  At one point there was a ship at each quarter all with in a 6 miles range.  Thats amazing when you think about the mass amount of ocean you have a round you.  The first crest of the moon made an appearance and was a welcoming site.  It felt like forever since we had seen the moon, although it hadn’t been that long at all.  Its funny how you miss something so small yet so significant at times when you are looking for it.

The nights were dark and the skies were lit with stars.  Even the Milky way stood out so predominantly in the dark.  Like a million little lights clustered together and shining down on us.  I had noticed an increase in the amount of phosphorescence the last few nights.  So like the sky the sea seemed to twinkle in our wake.

We were running with a smooth sea and a light breeze that matched the speed of Louise.  It was almost like the perfect conditions.  I embraced that moment as I knew the next day the conditions would change with a frontal system moving through.

Monday morning 7th October we woke to a different motion of the boat.  From our bunks we could feel the pitching motion which indicated that the sea had already turned against us.  Gradually throughout the day the wind picked up and the conditions got stronger.  This was the beginning of what the next two days were going to be like.  The sky was completely grey and overcast which was quite welcoming after the previous few days of heat and sun.  The nights however were dark and menacing as the conditions were unstable.

As our 6th night of the passage drew in just before the complete darkness was upon us we passed several massive southern right whales.  Their spouts were spotted in several locations around the boat and then it was dark and subconsciously a certain amount of fear seemed to sink in.  Fortunately the night was uneventful minus the unpredicted winds which seem to go from one extreme in strength to another.

Traffic started to increase as we entered a minefield of oil rigs. Our last and final full day at sea for this leg was greeted with a final blow, some rain and then blue skies and sunshine.  The wind shifted and the sea smoothed out.  It was back to comfortable sailing again.   The colour of the ocean changed as we reached the shelf and our starboard horizon was once again littered with local fishing boats.

At 17:30 on Wednesday 9th October mainland Brazil came into view.  A shadow out of the clouds.  As day turned in to our last night the coast lit up and so did the fishing fleet.  The sky was clear and full of stars.  The moon was bright and it lit a path a head of us as we negotiated the fleet and flashing long line buoys.

Near the end of my watch land was right there.  The Cabo Frio lighthouse flashed at us.  The trip was nearly over.  Rio de Janeiro was just around the corner. 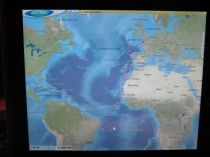